What is Bill C-81 – The Accessible Canada Act about? 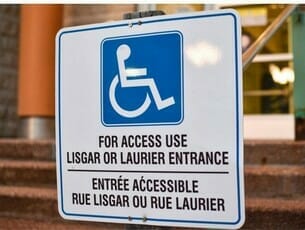 On June 20, 2018, the Accessible Canada Act was read in the House Of Commons. At this time, the Accessible Canada Act is called Bill C-81. Before becoming a law, Bill C -81 has to go through several stages in Parliament.
When it becomes a law, Bill C-81 will tell organizations and services that are controlled by the federal government that they have to remove barriers for people with disabilities. This includes barriers for people who have physical, mental, intellectual, learning, communication or sensory impairments or other types of disabilities.

Why do we need to strengthen Bill C-81?

Even though the Trudeau government promised in the last election to enact a national accessibility law, Bill C -81, which was passed last fall, is much weaker than what we people with disabilities need. The bill is strong on good intentions, but weak on implementation. We’re calling on the Senate to strengthen it.
The bill gives the federal government helpful powers to advance the goal of accessibility. However, it doesn’t require the government to use almost any of them, or set timelines for the government to act (with a minor exception). The government could postpone it indefinitely.
The bill lets the federal government create enforceable national accessibility standards to set accessibility rules. However, it doesn’t require the government to ever create any. If the government doesn’t, the bill will largely be a hollow shell.
Unlike Ontario’s 2005 accessibility legislation (which cannot regulate federal areas like air travel), this federal bill doesn’t set a deadline for Canada to become disability-accessible. Under Bill C-81, Canada may not become accessible to people with disabilities for hundreds of years, if no actions are taken.

What are our strategies to reinforce Bill C-81?

Bill C-81 now splinters the power to make regulations, including mandatory accessibility standards regulations, and the power to enforce this law among up to four federal agencies. This risks confusion, unnecessary complexity, and excessive cost. It will slow and weaken the bill’s implementation and enforcement. We need Bill C-81 amended so that there is “one-stop-shopping.”. People with disabilities should be able to go to one federal agency, the new Accessibility Commissioner, for all enforcement of the bill. All regulations to be made under the bill, including enforceable accessibility standards, should be made by the federal Cabinet.

Bill C-81 now allows federal public money to continue to be used to create or perpetuate disability accessibility barriers. Bill C-81 needs to be amended to ensure that when the Federal Government spends public money, it can never be used to create or perpetuate disability barriers. For example, the bill should require federal accessibility strings to be attached when the Federal Government spends or transfers public money for infrastructure projects, when it procures (purchases or rents) goods or services, or when it grants or lends public money to other public or private organizations e.g. for business development projects.