Home » Rheumatoid Arthritis and Genetics: Is it Hereditary?

Rheumatoid Arthritis and Genetics: Is it Hereditary? 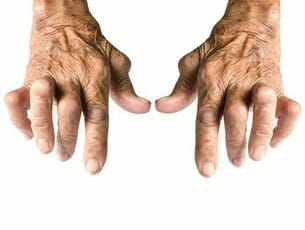 Rheumatoid arthritis (RA) is a systemic autoimmune disease in which your body’s natural defense system turns on you and attacks the synovial membrane in the joints. The immediate effects are inflammation, tenderness and stiffness of the joint areas. As the disease progresses erosion of the connective tendons is followed by destruction of the joints themselves leading to loss of function and painful, often extreme deformity. The disease may also manifest symptoms in various organs, hence its designation as a “systemic” disease, even though most commonly it causes walking impairments.

The Stages of Rheumatoid Arthritis

The pathology of RA in the joints follows a predictable course from initial swelling to final deformity and can best be compared to a siege which may take decades to completely unfold. The extent of final damage will depend in large part on your ability to obtain an early diagnosis and thereby affect treatments which can mitigate (although not completely halt) the condition’s destructive course.

The Genetic Link of Rheumatoid Arthritis

There are many suspected triggers for rheumatoid arthritis ranging from Vitamin D deficiency to the herpes virus. Two, however, stand out above the rest: smoking and genetics. Numerous studies have made the smoking/RA connection and it is now accepted that smokers, particularly heavy smokers, run three times the risk of developing RA that their non-smoking counterparts do.

As for genetics: the role they play in the development of RA is slowly coming into focus as data streams in from research studies worldwide. While there is still no way to conclusively say “You have these genetic markers therefore you will develop RA” the role genes play in both susceptibility and development of the disease is far better understood than it was even 20 years ago. Examples:

Genetic research holds perhaps the best chance at finally unravelling the puzzle of rheumatoid arthritis but there are many people who have questions as to why governments around the world would spend so much time and energy focusing on the seemingly remote possibility that we’ll find an RA gene and why they don’t spend more money instead on developing more effective and affordable everyday treatments.

While rheumatoid arthritis remains a stubbornly incurable condition the potential for significant breakthroughs in knowledge and treatment have never been greater than they are today. Researchers everywhere believe we are living in a time that will see mankind’s first demonstrated ability to arrest the pathology of this disabling and disfiguring menace and genetic research is leading the way toward that goal.

If you are afflicted with rheumatoid arthritis Disability Credit Canada can help you claim up to $40,000 in disability tax credit relief from the Canadian government. This important benefit is designed to provide the disabled with the financial leg up many of them desperately need.