Since 1988, the Disability Tax Credit has offered a substantial credit from the CRA for people with disabilities. In CRA terms, the credit is available to “individuals who have a severe and prolonged impairment in physical or mental functions.” Although the largest number of people applying for the credit are seniors, the number of cases of applications for children with disabilities is on the increase.

Although children are most likely not going to have tax liability of their own, the credit can be transferred a close relative (not limited to parents) upon whom the child is financially dependent.

These childhood disabilities need not be of a physical nature, and may include those of a psychiatric nature. The range of those which qualify is expanding, and, over the past few years, the CRA has begun extending the credit to parents of children with ADD (Attention Deficit Disorder) and ADHD (Attention Deficit/Hyperactivity Disorder.)

What is the Disability Tax Credit?

The credit was instituted to create a degree of equity within the tax system, and assumes that persons with disabilities spend more on the basic necessities of life than does the non-disabled population. The credit is designed to compensate for that higher cost of living.

The credit, however, does not take into account the precise costs of living with a disability: it is a fixed amount which is used to reduce the individual’s taxable income. For the year 2013, the amount of the credit is $7546. An additional subsidy of $4402 is available to those caring for a disabled minor, in that case bringing the credit to $11,948. 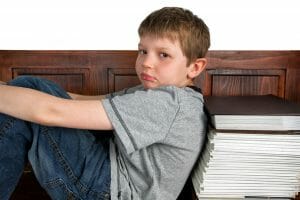 Eligibility for the Disability Tax Credit and Children with ADD/ADHD

The CRA provides guidelines at once strict and fluid to determine who may claim the credit. In addition to the definition given above, the guidelines require a “marked impairment” in one of several areas of functioning, or “significant impairment” in two of those areas, for “all or substantially all of the time.” In order to keep the requirements for the child disability tax credit in line with other areas of the tax code, a mathematically meaningless figure of “90% of the time” was brought in by way of specious elucidation.

The impairment is also required to be “prolonged” in nature. That is very straightforwardly defined as having lasted for a minimum of twelve months.

The areas of daily functioning laid forth in the eligibility requirements (excluding vision impairment) are:

Most of these obviously would not apply to a case of ADD or ADHD. The one which most readily would apply is the final one, mental functions necessary for everyday life. It is also the hardest one to define rigorously, and is further broken down into the similarly vague categories of:

In many cases of ADD and ADHD, one could certainly argue that the child is markedly restricted in performing tasks in all three of those areas, and would, thus, be eligible to claim the Disability Tax Credit.

The eligibility guidelines rather confusingly attempt to distinguish between “marked” and “significant” impairments, both of which use the “all or substantially all of the time” and the 90% figure as standards.

This is potentially highly relevant to the case of children with ADD and ADHD, who well might not meet the “markedly restricted” criterion in the mental functions category, and who would, therefore, need to be established as “significantly restricted” in a second area. (A case could be made, for example, that the child with ADD requires an inordinate amount of time to dress.) This makes demonstrating eligibility more complicated, and potentially less certain than in cases of evident (and “marked”) disabilities, such as blindness.

The Disability Tax Credit certificate is obtained by submitting form T2201 to the CRA.

The forms are conveniently available online at www.cra.gc.ca, or may be requested by telephone at 1-800-959-2221. The original signed form must be submitted by mail to the appropriate tax center.

The Disability Tax Credit and ADD/HDD: To Apply or Not To Apply?

The Disability Tax Credit has been highly criticized by the disabled community for the vagueness of language in its requirements for eligibility, which can lead to decisions which can border on the arbitrary. One might also legitimately take issue with the credit’s failure to take into account the actual costs of living with a disability. It nonetheless does offer significant tax relief for the disabled and relatives caring for them.

The emerging trend of extending the credit to parents of children with a widening scope of psychiatric impairments makes it potentially valuable in the case of children with ADD and ADHD. If one has a child with either of those conditions, one would do well to apply for the credit. There is very little to lose by submitting form T2201.

That comes with one proviso: there are a number of “services” which advertise heavily online, offering assistance with the application procedure. The reality is that form T2201 is hardly that intimidating, and that any reasonably capable medical doctor or psychologist ought to be able to complete the certification portion capably. As the description of the procedure above shows, there is little mystery involved in applying, although, that, in turn, cannot be expected to guarantee against a mystifying response from the CRA.