Home » Should the diagnosis of ADHD be considered on a spectrum?

Should the diagnosis of ADHD be considered on a spectrum? 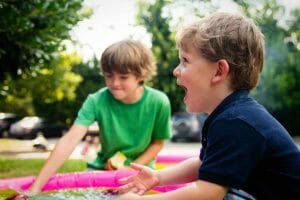 According to Statistics Canada, Attention Deficit/hyperactivity Disorder is one of the most common conditions in children. It also states that boys are three times more likely to develop ADHD than girls and the symptoms usually arise between the ages of three and five (Find out more about disability tax credit for ADHD). The number of children diagnosed with ADHD has been on the rise through the years. It has now become a rising issue for parents as well as teachers at school to deal with. A recent article in NPR by Anya Kamenetz talks about a recent editorial published in Journal of American Medical Association Pediatrics which proposes diagnosing ADHD based on a spectrum instead of just parents and doctors filling out a questionnaire. Take a read at this excerpt from the article:

Parents, schools and doctors, he says, should completely rethink this highly medicalized framework for attention difficulties.

“ADHD does a disservice to children as a diagnosis,” Christakis tells NPR Ed.

Here’s why. Researchers are currently debating the nature of ADHD. They have found some genetic markers for it, but the recent rise in diagnoses is too swift to be explained by changes in our genes. Neuroscientists, too, are finding brain wiring patterns characteristic of the disorder.

But the current process of diagnosis amounts to giving a questionnaire to parents and doctors. If they identify six out of nine specific behaviors, then the child officially has ADHD.

As you can see, the current way to diagnose ADHD depends on a few questions that doctors and parents answer and if the child shows 6 out of 9 behaviors, he/she is officially diagnosed with ADHD. The editorial by Dimitri Christakis however suggests that diagnosing ADHD should be done more on a specturm. He states that for kids that might be suffering from ADHD but do not get the right diagnosis based on the questionair, it takes away his/her legal rights to support. Christakis suggest that the attention capacity for a child varies between individuals and between situations.

Attentional capacity, Christakis says, is chief among a cluster of non-academic skills that education researchers have recently become very excited about: executive functioning, self-regulation, grit. Basically, these involve the ability to delay gratification, manage your time and attention and stay on a path toward a goal.

Every child — every person — struggles with this sometimes. Reading to, singing and playing with young children, and making sure older children get a chance to move around, are interventions that can help all students to a lesser or greater extent. “Our job is to have every child maximize attentional capacity,” Christakis explains.

A leading pediatric, Mark Mahone, also agrees with Christakis regarding disagnosing ADHD on a spectrum. He suggest that pediatrics are also evolving towards actively supporting attentional functioning in everyone.

Mark Mahone, a pediatric neuropsychologist at the Kennedy Krieger Institute for children with special needs, agrees with Christakis’ concept of a spectrum for attentional disorder. “The current thinking in the field is that attentional capacity and skills do occur on a continuum or spectrum.” He also says that in general, pediatrics is evolving toward the idea of proactively supporting attentional functioning in everyone.

Therefore, there is a growing need to provide support for children suffering from ADHD but for a child to get proper support, there needs to be a proper diagnosis. This means, schools and doctors need to start looking at ADHD on a spectrum instead of the current linear way of thinking.

We at Disability Credit Canada help Canadian families with kids suffering from ADHD claim tax credit. Give us a call to get a free assessment.